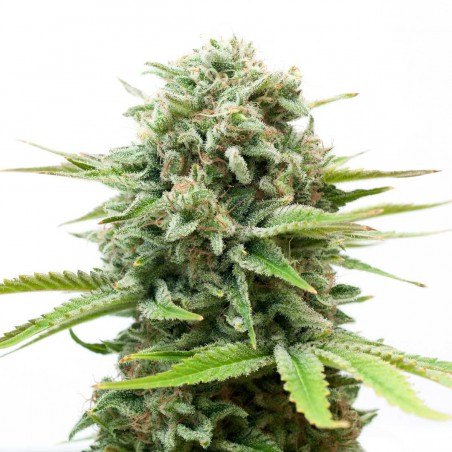 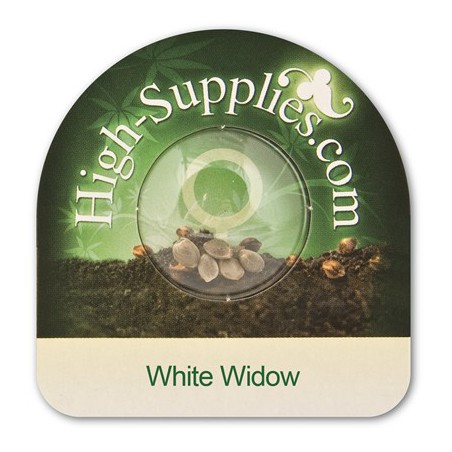 White Widow is one of the most popular kinds available and belongs to the white types of cannabis plants.
Indica and Sativa influences can be seen when growing because she doesn't get too tall but the leaves have a thick texture while long thin leaves that have a healthy medium dark green colour.
Be careful with the side branches because most are fragile.
In its flowering period the white layer of crystals will appear that promises growers the desired effects and the buds grow full and dense, as we call it the "fluffy" look.
While growing the odour of tasty pine and spices enter your nostrils and the smoke she gives when being consumed is also sweet and spicy.
The effect you get from smoking the buds is a heavy high buzz that lingers on smoothly.
Only the first half hour will keep you in a couch-lock but then the energetic high can take over.

White Widow feminized seeds produce one of the strongest strains of weeds in the world, which have won several awards, and built the reputation of being among the most powerful strains… They are a great hit in almost all coffee shops across the world. It is a potent hybrid sharing its genetics with Brazilian and an Indian strain.

The Reason behind Its Nomenclature

White Widow gets its name due to the intense production of crystals that make it glimmer and shine. It is a great option to be considered by aspirant breeders due to its highly powerful sativa effect. It is suitable for both indoor and outdoor cultivation. When grown indoors, it finishes in around eight weeks and outdoors in late October.

Extremely High THC Levels of Up to 25%

White Widow feminized seeds grow into tall marijuana plants with delicate arms. The buds that are produced are fairly compact so as to hold the plentiful quantities of THC generated. Yes, the THC produced is so high that it is not easy to see the bud at all.

As for the effects, it is a pure indica feeling that converts into a bursting sativa high. Overall, smoking this indica dominant variety is enjoyable and complex with a long-lasting effect and fast hit. Needless to mention, it is one of the most expensive strains for all the benefits offered.

White Widow feminized seeds are undoubtedly one of the best White kinds of cannabis strains that one can try out, and you can avail even the pricing advantage by ordering them from High-Supplies.com

@CUSTOMER_NAME@ | @COMMENT_DATE@
No customer reviews for the moment.

Are you sure that you want to report this comment?

Your Question has been successfully sent our team. Thanks for question!

Lue : "How many grams does your white widows yield in out door grow?"

High Supplies: Around 500 grams per plant.

Paul: "Any sugestion on how to control thrips on indoor grow in potted plants.? "

Paul moniz: "What is the thc % on white widow"

High Supplies: Above the 20% THC

Barry B: "HI
of all the seeds you sell . What is the one that creates the highest THC level
Thanks
Barry B"

Elijah: "How manny seeds do you. Get wen you order just one or a few an "

Demon Soul: "Do u guys sent to South America just asking for a friend because I'm in LA so do guys??"

Cory minez: "What is shipping cost?"

High Supplies: Shipping to the US is 4.50 USD (depends on the internal currency rates)

Gilbert Smith: "Do you deliver inside the United States"

Nikola : "Do yo sent to Bosna and hercegovina? "

High Supplies: Yes we do.

Schmidtknot: "I purchased both the White Widow and the Top 44 feminized seeds and 2 of each of the 3 that were planted survived. Of each of those, they are split. There is a very tall and a very short version of each plant (the taller ones are almost double in height and complexity) and I would like to know why. They were planted at exactly the same time in the same conditions and soil, and they even began by sharing pots for each strain. Having sprouted back at the end of July, they have maintained this drastic difference, and the two shorter ones have not broken 23" in height. "

High Supplies: Top 44 is the short one. Check also our grow guide for advice https://www.high-supplies.com/en/content/category/2-cannabis-growing-guide

Rene: "Better to plant in earth or pot...Which will grow better
"

Shelly: "Will it grow outside in a flower pot? I read where it was good to grow it indoors, but it will grow good outside too? Thanks"

High Supplies: I need more space then a flower pot to get good results, check our grow guide https://www.high-supplies.com/en/content/category/2-cannabis-growing-guide

High Supplies: These are feminized only, in the autoflower section we also have them in autoflower.

Efthymios Pardalis : "How many grams produce one tree? Indoor White widow i mean, thanks!"

james monroe: "How much grow space do I need for each plant?"

scott: "do you clip the first bud that come's up"

Dain : "Do u ship to Trinidad and Tobago "

High Supplies: Yes we do.

John doe: "Are there instructions how to grow and maintain healthy buds"

Kaine: "How many buds come on one plant"

High Supplies: Many buds, do not worry.