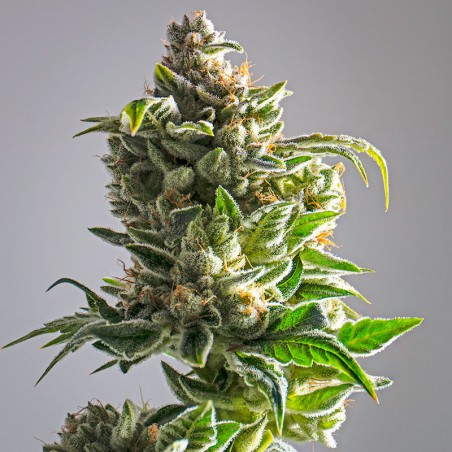 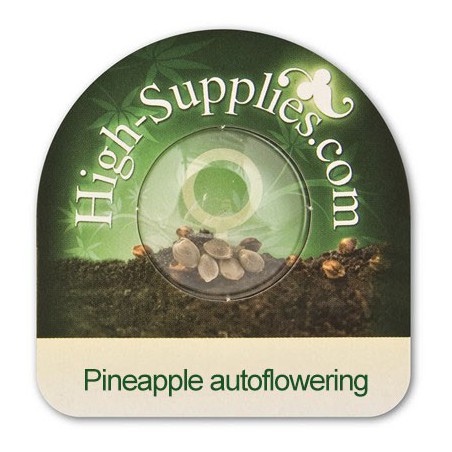 Noted for its fruity flavors and energizing effects, Pineapple Express is one of the few strains even non-tokers know about. Of course, the reason Pineapple Express is so popular to do with a little movie you might’ve heard of: Seth Rogan’s stoner classic Pineapple Express! While it’s unclear whether Rogan deserves credit for naming this sativa hybrid, it’s quite obvious he gave the strain international attention.

Although Pineapple Express is an easy, relaxing smoke, it could be a bit tricky for new home-growers. To help novice cultivators enjoy this strain, many cannabis growers have now begun adding ruderalis genetics to Pineapple Express, thus creating Pineapple Express Auto. These autoflowering seeds still yield plenty of pungent Polynesian buds in a short span of time.

Pineapple Express owes its genetic heritage to two sativa-dominant strains: Trainwreck and Hawaiian. This strain owes all of its fame, however, to Seth Rogan’s 2008 stoner comedy named (obviously) Pineapple Express.

As is suggested in the film, Pineapple Express is best enjoyed amongst fellow weed-enthusiasts. The high produced by Pineapple Express is just right for dampening social anxiety without causing sedation. Plus, due to its sativa-dominance, Pineapple Express gives users a slight energetic boost that helps sharpen the senses and increase productivity. Overall, the effects of this fruity strain are a nice mix of relaxation and energy-boosting, which makes it a safe strain for newbies.

Typically, Pineapple Express has a THC content between 15 – 20 percent. CBD content, on the other hand, is usually no greater than 1 percent. Although it’s not much, the CBD in Pineapple Express could account for some of the strain’s relaxing effects.

Sativa to indica balance for a typical Pineapple Express is around 70:30, but remember autoflowering seeds also have ruderalis genetics. Because cannabis ruderalis has a set grow time, growers who use Pineapple Express Auto don’t have to worry so much about changing their lighting setup as the plant matures.

Honestly, nobody’s quite sure how Pineapple Express got its name. While Seth Rogan likes to think his film gave the strain its name, the only thing we know for sure is his movie made it a household name.

Pineapple Express Auto is a very hardy strain that does well both indoors and outdoors. Thanks to its strong resistance to mold, this strain is particularly good for new growers interested in improving their sativa grow techniques without worrying about wasting feminized seeds.

One feature to look out for in Pineapple Express plants is their height. Sure, these autoflowering seeds won’t soar as high as a traditional strain, but they still could easily reach over 100cm. We recommend prepping your indoor grow station to accommodate for this average height so you won’t be flustered later in the grow process.

As the plant reaches its flowering stage, you will start smelling those distinctive earthy and fruity flavors. Definitely invest in a good quality air filter if discretion is a priority.

Not only does Pineapple Express smell like a pineapple, it also kind of looks like one! As your plant matures, you should notice lush light green leaves covered with white trichomes and orange pistils.

Fun fact: some growers point out Pineapple Express performs better with slightly cooler temperatures. Apparently, the added stress of occasional bursts of cool air helps increase terpene production, which leads to a stronger flavor. The average temperature range, however, should be in the 70s to mid-80s F for optimal results. People who live in maritime climates should expect the best results from growing Pineapple Express Auto seeds outdoors.

Pineapple Express Auto should grow to full maturity within about 60 days whether you’re growing indoors or outdoors. As for yield, usually you’ll harvest about 2 oz/ft2.

To increase the odds of raising high-yielding plants, a few growers recommend using a generous amount of coconut fiber in your soil mix. The addition of this fiber is said to increase oxygenation, helping your Pineapple Express Auto seeds grow healthier and faster.

As you’d expect from a name like Pineapple Express, the dominant flavors in this strain are reminiscent of tropical fruits. Indeed, the terpene myrcene, which is closely associated with mangoes, is often listed as one of the most prominent in Pineapple Express.

But it’s not all about fruity flavors when riding the Pineapple Express. Indeed, users should also pick up citrusy notes from the terpene limonene and a refreshing earthiness provided by alpha-pinene. On the exhale, you might even catch a slight note of spiciness provided by the peppery terpene beta-caryophyllene.

As already mentioned, the effects of Pineapple Express Auto are both energizing and relaxing. Users usually report a creative buzz, increased focus, as well as an overall sense of joy. For these reasons, Pineapple Express is excellent for people who are searching for a way to overcome anxiety in social situations. Creative types might also enjoy Pineapple Express Auto for its ability to help bust through writer’s block.

With a strain as popular as Pineapple Express, you’d better believe there are a lot of copycats out there. Looking for an alternative to Pineapple Express Auto seeds? If so, take a peek at these strains with similar genetic profiles.

First cultivated from native Hawaiian landraces in the 1960s, Maui Wowie is a legendary strain that helped change the global cannabis scene. Before this sativa strain came around, few marijuana plants had THC contents hovering near the 20 percent mark. Of course, things have changed quite a bit since the 60s, but Maui Wowie still delights users with its tropical flavors and its energizing high. As an added bonus, Maui Wowie is also known to be a good appetite stimulant.

If Pineapple Express isn’t dank enough for you, then perhaps The Real McCoy is up your alley. Made with a blend of Hawaiian and Skunk #1, The Real McCoy certainly has a pungent flavor profile full of the earthy, cheesy, and, well, skunky goodness associated with Skunk #1. In terms of effects, this sativa-dominant hybrid provides users with a giggly high that both relaxes and energizes. Because of its relatively mild THC count, The Real McCoy is well suited for sharing at social occasions.

After years of interbreeding genetics in the Ed Rosenthal Super Bud, Dutch cultivators finally created the sweet indica strain now known as Pineapple. Yes, you read that right; Pineapple is an indica strain. It’s important not to get this strain confused with the many sativa-based strains that share the Pineapple name. Due to its indica genetics and high THC count, Pineapple can be quite sedating and is only intended for nighttime use. Although you need to take a huge dose of Pineapple to feel couchlock symptoms, you will most likely feel sleepy after a few strong hits.

Users who are looking for a more intense energy boost than Pineapple Express might consider looking into the invigorating Pineapple OG strain. Made with a blend of OG Kush and Pineapple Express, this potent strain has a commanding “sweet & sour” flavor profile with notes of bright citrus, tropical fruits, and pungent gasoline. Pineapple OG is only intended for daytime use because of its strong energizing effects and elevated THC count. There is, however, usually a bit of CBD in Pineapple OG to help relieve sore muscles and induce a pleasant relaxing sensation.

@CUSTOMER_NAME@ | @COMMENT_DATE@
No customer reviews for the moment.

Are you sure that you want to report this comment?

Your Question has been successfully sent our team. Thanks for question!

Roland Albritton: "For the time yo harvest it say 50 to 55 is that from seedlins or after they start to flower "

Roland Albritton: "My question was is it OK to throw the autos in on a 12hr and 12 hr off and they will still grow correctly "

High Supplies: Do not change the light for autoflowers, they do not need it.

Roland Albritton: "Threw them in with a batch that are in the 12 on 12 off will that be ok I know 18 and 6 or the full 24 but I need another light for my other tent to do that"

High Supplies: Put the seeds in a glass of WARM water and put the glass in a dark area, after 5 days the seeds are germinated.

Paul : "What is a auto flowering seeds would like some info on that please "

High Supplies: Compared to regular marijuana seeds the plants produced from the series of autoflowering cannabis seeds are able to skip the slow blooming cycle and begin this phase within a timeframe of four to six weeks after germination; irrespective of the quality of light received.

Princess Blossom: "I live in Washington but will be growing inside will these take inside?"

Albert: "What about southeast NM? Will there grow in our region."

Maddest Hatter: "Will these grow well in north Carolina and how long"

High Supplies: Yes, they will work great there.
Flowering time after 50 - 55 days

Dalton: "Do you ship discreetly?"

Sarah: "Will these grow outside in az winter around 40 degrees? Or too cold "

Nicola Gulli: "Is this plant feminized?"

High Supplies: Yes, all our seeds that we sell are feminized.

Dubious Brackman: "How long from germination to harvest ? Just after a rough estimate "

High Supplies: Pineapple Express has a THC content between 15 – 20 percent

Dubious Brackman: "I meant does the plant respond well to low stress training "

Dubious Brackman: "Does this strain respond well to L.S.T? I just ordered some and I'm keen asf to give this a try . "

High Supplies: We are not allowed to give medical advice.

High Supplies: around the 350 grams per plant

Ashley: "What is the germination rate. Will all 5 seeds grow into plants or will4 out of 5 grow???"

High Supplies: They should all grow. For good germination: Put the seeds in a glass of WARM water and put the glass in a dark area, after 5 days the seeds are germinated

High Supplies: With track and trace around 15 days

Don: "How many seeds come in a pack?"

Drake: "Do you ship to Iowa? Am I going to get caught through the mail? "

High Supplies: Yes we ship there, it will arrive do not worry.

DaddyPig: "When clicking amount and it says 1 but I scroll down and it says number of seeds 5. So my question is 1 order a total of 5 seeds?"

High Supplies: Yes, 1 order has a total of 5 seeds